We can start with the basics. And then we can go from there into some of how to save money and other things like that.

How to Acquire a Copier

And then on top of the leasing plan, you’ll have a supply and service plan, which will take care of the following:

So what we’re talking about here is the getting of the physical equipment into your office.

How to Calculate Your Copier Lease Rate

The first thing to know is there are tables. When we’re making a copier sale, we’re looking at a table kind of like this:

We also have a $1 Purchase option, which means at the end of the lease, you pay a dollar, and the copier now belongs to you.

You have different rates basically because, on the Fair Market Value lease, they’re giving the copier back, and there’ll be a value to that. The $1 Purchase Option lease lets you keep the copier, which is gets factored into the numbers on the table.

So, I would tend to do the $1 Purchase Option because then I have an option to run it further afterward. If it’s still running great, I could sell it on Craigslist or use it as a backup.

Other people want to have the payment as low as possible. And they’re going to depend on the copier company to take care of that shipping fee, which will get rolled into the next lease, at the end of the contract.

We try to focus on how we make sure that you’re in the right part of the stairsteps so that you can get the best rates possible.

Technically, it may mean adding a hundred dollars to your cost to ensure that your price goes down based on the lease rate factor.

So I like to have a reminder put into the calendar that lets me know on month 56 that we’re coming to the end of that lease. Ensure that you give the appropriate notifications because there’ll be a clause that says that if you don’t renew within a specific timeframe, you’ll have to keep it for maybe another three to twelve months depending on how it’s written.

One of the other things I try to look for within a lease is automatic escalations.

What an automatic escalation is, is it’s going to take the number like where we had here, $60 a month for that $3,000 copier, and it’s going to say, every year we have the right to raise the lease rate a particular percentage The standard percentage is somewhere around 10%.

If you didn’t have that escalator, it would be harder to roll the next copier in because that escalation makes your lease payment higher each year. So I always would avoid escalation fees.

It’s easy for most copier companies to take that out of their contracts. We’d always recommend that when you lease a copier that you make sure you don’t have an escalation fee.

And be sure to mark down when the lease is supposed to expire.

The next thing I would pay attention to is the idea of coverage limitations. That’s on the supplies and service agreement.

So, each copier is rated to do a certain number of pages per toner cartridge.

So you have a toner cartridge, which has a bunch of toner in it. And each page that you print is going to utilize a certain amount of that toner. And it’s based on a recovery trait, and usually, that’s 5% per color. So the color is 20% because there’s four colors, cyan, magenta, yellow, and black. The black and whites 5% coverage is a typical industry average because it’s only black. There’s no cyan, magenta, or yellow to take into account.

What happens on some leases or some service plans is that if you exceed 5% or above 20% color coverage, then there can be a multiplier added to compensate for the toner usage. So if it turns out that you’re averaging 30% or 40% coverage, instead of 20%, your color rate can rise by 1.5 to 2 times. Check to see if there’s a penalty if you exceed a particular percentage within your coverage.

And so that’s something else that we look at and try to make sure that, you know, if you’re going to lease a copier that you’re paying attention to your coverage, or getting ideally a lease contract that does not have a penalty on color coverage.

What to Look For in Overage Charges

You also want to see what your overages are. Overages technically should be lower in price, not higher, if you exceed the base.

What will happen on a base is that you’ll get a certain number of prints.

Often, I’ve seen that people will make the overage rate higher than the base rate, which doesn’t make sense because most of the service should be contained in the first part. And the overage should be cheaper because the service is already included in the base. And because the copier company is going to want to make sure that their service department is whole. So they’re going to make sure that the service is in there, no matter what. And then, once you exceed that base, the service part has been handled, more or less.

Of course, the more prints to do, you will have more service calls. So there is more service expectation. So you would expect more service calls, but the cost is going to be lower because you don’t tend to find a one for one ratio there. And so if you’re at a penny per page for 10,000, we would expect that once you exceed 10,000, it should be nine-tenths of a penny or something like that. It shouldn’t be 1.2 cents after you hit the 10,000.

How Does a Zero Base Contract Save You Money?

I’ve noticed that a lot of customers are concerned about having zero base. Zero base would be ideal if I were buying a copier because then you’re just paying for what you’re using. You’re not paying for 10,000 prints and then only doing 5,000, and therefore your effective cost per print doubles. So I would always personally get a zero base contract unless I got a massive discount for the inclusions.

So I would always say whatever you think your minimum month is that you should do roughly 80% of that rather than signing up for your average because your average is going to fluctuate.

You’ll have some months that are higher than your average and some lower months. So, I would take my lowest month, and then multiply that by 80%. And I would use that as my base.

This way, I knew whatever I was doing, for example, if there’s a pandemic, like what we’re going through currently, and nobody’s working at the office, I’m not stuck paying for 10,000 pages a month while everybody’s gone.

One of the things that we see from some people is if they are looking at different products, what they’ll end up doing is getting, for example, a Xerox Altalink C8070 for $219 a month and 70 pages per minute because of speed.

And so one thing to be aware of is that sometimes these high-speed copiers, like the C8070, go 70 pages a minute when it’s fully warmed up, but it may take longer to warm up. 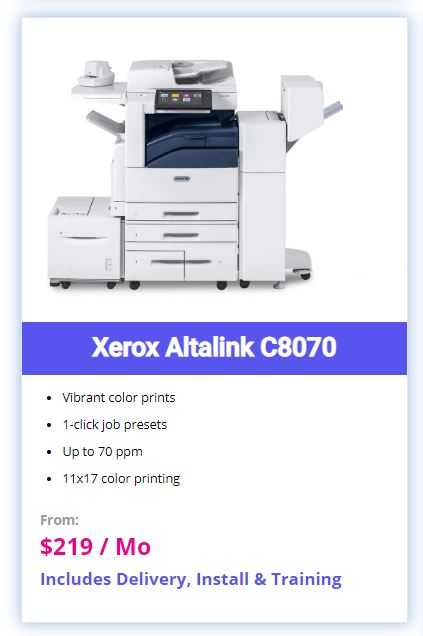 So, people will take a fast one because they want to go fast like this instead of a slower one. After all, they’re thinking 70 pages per minute is twice as fast as 35.

The one thing to be aware of is that many of these copiers producing 70 pages per minute, anything over 50, can often take longer to warm up. And then if it’s a small job, you’d go faster by having the smaller, more compact copier.

So it’s not always that the higher rated speed is the faster copier. One thing you need to look at is the warmup time because if you don’t factor in the warmup time, it could take 30 seconds to warm up in eight seconds for the other.

So you have 22 seconds of it being able to print, and most of your print jobs will be just a few pages. And so you could find that your day to day printing is slower by going with the faster copier.

It sounds kind of strange, but one thing to keep in mind is the more small jobs you have, the less that speed matters. The more long jobs you have, the more speed matters. If you’re doing 2,000 pages, you know, reports or 1,000-page reports, or even 200 page reports suddenly going 70 pages per minute, it starts making more sense because it takes three minutes to do that job instead of six on a 30 page per minute copier.

There are also duty cycle considerations. If it’s 10,000, 20,000 pages per month, you’re still probably going to want to go to a higher-end model just because of the print volume, not because of the speed requirements. So that’s another thing to consider.

I hope this was useful to you because you know that’s our goal here at Copy Lease Center is to provide great information to our clients. And so if you have any questions or concerns, please feel free to give us a call. We always work to get you a fair copier lease, and we’d love to chat with you. Thank you so much.